BackTap: Robust Four-Point Tapping on the Back of an Off-the-shelf Smartphone 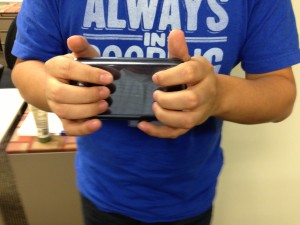 BackTap is an interaction technique that extends the input modality of a smartphone to add four distinct tap locations on the back case of a smartphone. The BackTap interaction can be used eyes-free with the phone in a user’s pocket, purse, or armband while walking, or while holding the phone with two hands so as not to occlude the screen with the fingers. We employ three common built-in sensors on the smartphone (microphone, gyroscope, and accelerometer) and feature a lightweight heuristic implementation. In an evaluation with eleven participants and three usage conditions, users were able to tap four distinct points with 92% to 96% accuracy.

This work was published on UIST ’13 Adjunct Proceedings of the adjunct publication of the 26th annual ACM symposium on User interface software and technology[Paper][Video].